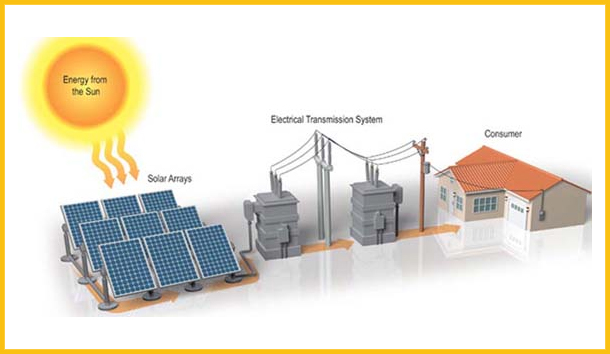 What is Captive Solar Power System?

A Captive Solar Plant is a PV plant that has been implemented by a consumer for its own captive consumption. The power developed is consumed entirely by the developing consumer itself. There is a common misconception that all captive solar plants are of the roof-top variety. Most of the Captive Solar Plants are set up outside the premises due to the lack of roof-top area available on the site since the amount of power consumed by industries is typically in thousands of units per day.

You will achieve independence from the ever increasing grid tariff rates. If your company consumes above 1 lakh units per month, and are probably paying more than Rs. 8/kWh, a captive solar plant will be an incisive judgement for you to save costs, and secure your electricity price for the next 25 to 30 years.

2) Higher tariff margin profit: Industries run during the daytime when the utility grid is at peak-load. The grid charges a higher tariff rate during this time. However, since you will be generating power during the day as well, you will not be affected by these exorbitant rates!

3) Increased savings and association with green energy: Once the buy-back period is over, you will be generating electricity at absolutely no charge. This will lower the maintenance cost of your industry and shine you in a better light compared to other competing industries. Customers will see you as an environmentally friendly company and raise your value in their eyes.

1) Grid-tied inverter: The job of a solar inverter is to regulate the voltage and current received from your solar arrays and then convert it from Direct Current (DC) into Alternating Current (AC). These inverters synchronize the phase and frequency of the current to fit that of the utility grid (3-phase, 50 Hz). Additionally, the output voltage is adjusted slightly higher than grid voltage so that excess electricity flows into the grid.

2) Net meter and solar meter: We will install a solar meter so that you can accurately track the amount of solar power generated by your Captive Solar System. A net meter will be installed to track the units you feed into the transmission lines and the number of units used by your industry.